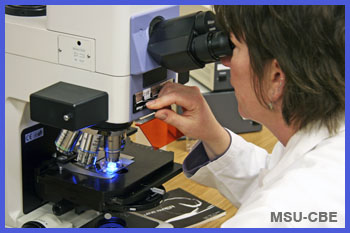 Microbial communities attached to surfaces (biofilms) were observed long before people had the tools to study them in detail. In 1684 Anthony van Leewenhoek remarked on the vast accumulation of microorganisms in dental plaque in a report to the Royal Society of London: “The number of these animicules in the scurf of a man's teeth are so many that I believe they exceed the number of men in a kingdom.”

The study of microbes took an important turn in the mid-1800s, when Robert Koch developed methods to create a solid nutrient medium in order to grow and isolate pure cultures of microorganisms. This development led to huge advances in medicine, agriculture, and industry. However, these advances were based on such a simplistic concept of microbial life that many 'solutions' generated by these techniques are now being reversed. Microorganisms have proved to be much more complex and less tractable than we ever imagined.

In a 1940 issue of the Journal of Bacteriology, authors H. Heukelekian and A. Heller wrote “Surfaces enable bacteria to develop in substrates otherwise too dilute for growth. Development takes place either as bacterial slime or colonial growth attached to surfaces.” Claude ZoBell described many of the fundamental characteristics of attached microbial communities in the 1940s. In the late decades of the 20th century, numerous articles were written about microbial films or slime layers; German researchers sometimes used the term “Schmutzdecke.”

As the unique properties of microbial communities vs planktonic microbes grew more apparent, it became helpful to use a special term to describe them. “Biofilm” was used colloquially among researchers for some years before it was considered a term acceptable for use in publication. The earliest use of “biofilm” in publication is from the journal Microbial Ecology, 1975: Mack WN, Mack JP, Ackerson AO, “Microbial film development in a trickling filter,” 1975, Volume 2, Issue 3, pp 215–226. The first sentence of the abstract reads: “The transmission and scanning electron microscopes were used to visualize the sequence of the biofilm development in the trickling wastewater filter.” (Thanks to Paul Stoodley for snagging this one. If you know of an earlier publication with “biofilm” in it, please let us know; we would be happy to make a correction.)

In 1990, recognizing the significance of microbial activity, as well as the tremendous economic costs associated with microbial communities on surfaces, the US National Science Foundation founded the Center for Biofilm Engineering at Montana State University in Bozeman (though, interestingly, NSF would not initially accept the word “biofilm” in the Center’s name; instead the award funded the “Center for Interfacial Microbial Process Engineering”). Since that time, the field of biofilm research has exploded. New tools and techniques are continually pioneered to help understand the secrets of microbial community interactions. In addition to numerous research laboratories in the US, several groups study biofilms worldwide, including centers in Denmark, England, Germany, Australia, and Singapore.